Today, everything revolves around the topic of spring rolls and how to make them particularly crispy. Who doesn’t know them? The elongated dumplings are no longer a rarity and if I’m honest, it could even be that they were my first contact with Asian cuisine ever! Filling, dough coat and even the temperature vary greatly here, which is mainly due to the fact that they can now be found almost all over the Asian continent. It’s almost like dumplings. Whether Gyoza, Dim Sum, Wan Tan,Baozi – each country has its own variant of these small, delicious dough pieces.

I often have the feeling that spring rolls have a negative reputation, which is perhaps due to the fact that they can be found on almost every menu of “European-Asian” restaurants or delivery services, which still paste the entrance area with huge, colorful fish tanks and glowing Buddhas. I don’t want to dice these shops at all, because after all, they were the ones who put me on the first track of umami, soy and crispy fried ones at a very young age. And among them there were also spring rolls.

The dough: The most common variant is probably the variant with spring roll dough, which consists relatively uncomplicated of flour, water, salt and occasionally egg. From Vietnamese cuisine come the well-known summer rolls which are made cold and with rice paper. From India I have already seen a variant with a dough made of chickpea flour.

The filling: I think there are countless variants here, similar to dumplings. Whether vegetarian or vegan, with meat or fish, with rice noodles or potatoes or with salad. The combinations are incredibly diverse. Most of the time, however, you will find combinations of several components. A very common variant here is the one with minced meat, rice noodles and vegetables. These are also available in today’s recipe!

The cooking process: If you opt for a classic wheat dough, it is easiest to bake the spring rolls in hot fat. However, it is also possible to let the cooking process take place in the oven. Theoretically, you could even steam the dough! With a rice dough, it is common to soften the rice leaves in the water for a few seconds before filling and rolling them up. Afterwards, these are usually served cold. Gladly with a filling of salad, shimps and fresh herbs. Theoretically, you could also bake this variant in fat or even fry it.

As you can see, we have here again a dish from the category “limitless creative”, so just try a little! Today, my spring rolls get an even crisper dress made of thin threads – the kataifidough – in addition to their crispy outer shell. I stay classic with the filling, because it tastes best to me in the increasingly colder temperatures.

Crispy spring rolls. Here’s how to do it:

1. First, cut the shiitake mushrooms into fine slices. Peel the carrot and grate coarsely or cut into thin julienne. Peel the garlic and chop finely. If you like, you can of course also add some ginger here. In addition, halve the pok choi and cut it down finely.

2. Heat a pan with a little oil and fry the sliced ingredients briefly so that they get some color. Then let the fried vegetables cool.

3. Meanwhile, put the glass noodles in a bowl. Bring about 500 ml of water to a boil and pour over the noodles. Let the noodles steep for about 3-4 minutes and then quench. In addition, cut the spring onions into fine rings.

4. Now take a large bowl and add the minced meat. In addition, add the fried vegetables, the glass noodles, the sprouts and the spring onions. To season, add the oyster sauce, soy sauce, sesame oil and salt and mix well together.

5. Heat a pot with oil to about 160° degrees. Don’t get too hot, as the rolls could be too dark from the outside and still raw from the inside.

6. Now take a leaf of the spring roll dough and place it flat on a board. Spread part of the filling lengthwise on the bottom. Leave a distance of 4-5 cm to the edge. Then turn the roller up to half. Moisten the edge and top with water. Beat the sides to the middle so that they are closed. Then roll up to the end and glue. Continue with the other roles as described.

7. Finally, adjust the kataifidough vertically. Then cut it into shape with scissors. The threads can be 30 cm long and just as wide as a roll. Slightly moisten the finished rolled spring rolls from the outside and roll them into the kataifi dough.

8. Bake the rolls gradually in hot fat for about 5-6 minutes. Make sure that the threads are not damaged.

9. In the meantime, make the dip. Mix ketchup, soy sauce, vinegar and honey.

10. Carefully remove the rolls from the hot fat, drain on a kitchen towel and serve with the dip. 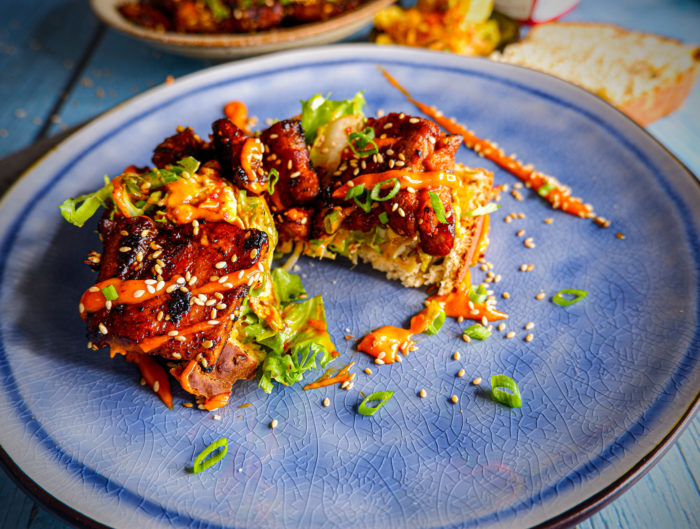