It’s been a long time since I had to go to school when I was still 17 years old. At that time, I was actually already interested in preparing good food, but never expected that I would eventually turn my hobby into a profession. In addition to compulsory working groups such as moped and English grammar, there was also the opportunity to participate in a band, which inspired me much more as a budding drummer than rehearsing the difference between Future two and Present Perfect Progressive. Well, in short, I was moved to the microphone and not because I was such an excellent singer (I was terribly bad), but because the space behind the drums was simply already occupied by someone who could realy play!

It was an insane time. We played together in this combination for almost five years and even recorded two albums.

However, before we threw ourselves at the instruments before each rehearsal to really rock out in our small band room, energy had to be refueled in the form of food. And since we had “Keules Imbiss” next to the school, culinary highlights such as Jägerwurst, Curryfrikadelle and of course Fries were eaten here.

But if you didn’t have enough pennies left, because they went for an XL ham-cheese baguette in the big break from Jutta, you had to be satisfied with the usual Dutch imports such as frikandel, spring roll or even Bami slices, which were relatively affordable, sold under one mark.

I thought the latter was already brilliant at the time! It was kind of smart to squeeze pasta and other ingredients together to bread them and then bake them in hot fat. Huge!

Even though the Barmischeibe has already appeared in one of my past posts (Beef Bakso),I have tinkered here and there again to pimp up the recipe a little more.

In general, I would argue that Bami is a European invention, probably even from our neighbors, the Dutch. These were once represented as a colony in Indonesia and brought a little cuisine and food culture to Europe. And as is so often the case, the classic “Bami Goreng” (fried noodles) then went through a few transformations and finally ended up as a vegetarian patty on the menus of all local snack bars.

I like to make it my task to reinterpret dishes. In this case, in addition to a good portion of dignity, fresh herbs and soft beef should also be added. The result is a real “snack poem”, which as a creative street food creation does not have to hide from other classics!

1. For the Bami slice, stew the beef first. To do this, cut the meat into cubes about 2-3 cm in size and fry in a saucepan with a little oil. Then peel the garlic and ginger, crush coarsely and add to it. Roast the ingredients for about 1 minute.

2. Then deglaze the meat with the broth and season with soy sauce, honey, cinnamon and star anise. Crush and add a spring onion. Cook the meat until soft for about 2 hours. Occasionally add some water.

3. When the meat is soft-boiled, carefully lift out with a foam trowel. Reduce the decoction to about 100 ml. Mix 1 tsp starch with a little water and tie the broth with it.

4. Brew the instant noodles with boiling water until soft, then drain and then put in a bowl.

5. Pluck the meat into small pieces and add to the pasta. Cut the spring onion into fine rings and add to the bowl as well. Add the reduced and bound decoction. Season the mixture with salt and, if necessary, tie a little with panco flour or starch so that you get a tough and easily malleable mass.

6. Now build the “Panierstraße”. To do this, put flour, whisked eggs and panko in separate bowls. Heat the oil in a saucepan to about 140-160 degrees. #

7. Now you take some of the pasta-meat mass and form small “bulettes” from it. It is important that it holds mass together well. Then the bulettes are carefully turned in the flour, then in the egg and then in the panco flour. Then you bake carefully for 5-6 minutes in hot fat and put them on a piece of kitchen creppe to drain.

8. When serving, you can add some tonkatsu sauce. You can buy these or simply make them yourself. How this works I will show you soon in the video! 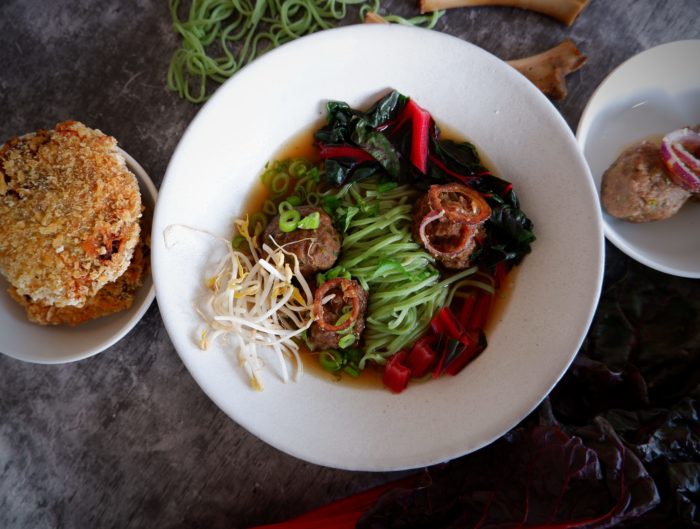